This is such a perfectly creamy chocolatey pie with a melt in your mouth meringue crust that really makes the pie very different from any other you have tasted. This is Amma’s recipe that the family has enjoyed for years during the holidays 🙂 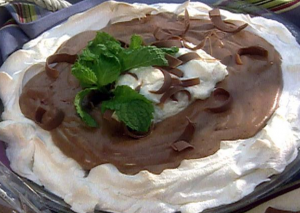 To make the meringue crust:

To make the filling:

Putting The Pie Together: